What We Learned Visiting TLM Parishes on Our Roadtrip

During our recent family road trip to the Northeast U.S., which spanned ten days and six states, we made the firm commitment to only assist at an Old Rite Mass. This included two Sunday Masses and a First Saturday Mass. In this post, I'm going to tell you about 1) why we made this commitment (something we would not have done, say, a year ago) and 2) the amazing things that we took away from this. I'm going to put some of the pictures of the parishes we attended at the end—did we visit yours?

How we found the Traditional Latin Mass (TLM) and went from attending occasionally to trying to attend it exclusively is a post of it's own (and one we've been trying to write for weeks now). Once we first started attending, we used to balk at the idea of driving 2+ hours away just to assist at an Old Rite Mass, like many people we know of do. Sure, it's beautiful, but why such an intense commitment to attend it?

(Before I go on, since this is the internet, we are in full communion with Rome, we believe the Novus Ordo is valid, and we believe the popes since 1958 were valid popes until and unless a council declares otherwise.)

So, saving our full TLM pitch for another post, here are five reasons we committed to assisting at only TLM parishes on our trip:

1. To avoid irreverence. You've probably been there when traveling. It's hard to tell what kind of parish you're going to get when you're just stopping through. Opting for a TLM takes the guesswork out of it. Since there is no room for improvisation and or "personalization" in the Old Rite, really the only variable is the homily. This cannot be said for the Novus Ordo. It boils down to this: It takes a holy priest to make sure a Novus Ordo Mass is reverent, whereas in the TLM the priest is constrained by the rubrics of the Old Rite to ensure the Mass will always be reverent, no matter his level of personal holiness (or lack thereof).

2. Out of justice to God. Again, this is probably a post in itself, but the fact is that Mass is not about us, no matter how much "participation" is expected of us in the Novus Ordo. It is about which Mass gives God the worship and glory due to Him, and there is no question the Old Rite is superior in this. Don't take my word for it, either: just compare the new and old missals side by side, and this fact becomes inescapable.

3. For more graces. This fact tends to be a hard pill to swallow for many, but it is fact that the Old Rite is more efficacious than the new. People much smarter than I am have devoted a lot of time to explain this, so I won't do it here. Again though, don't take my word for it. Compare the rites side by side. We are asking and praying for so much more in the Old Rite. We are given two absolutions, one right before Holy Communion in case we are willfully distracted or commit another venial sin after the first absolution at the beginning of Mass. There is the Last Gospel in the Old Rite that was taken out of the new. These are only a few examples, but the list goes on and on.

4. Because we are weak. Mental prayer is a higher level of prayer than vocal prayer. The Old Rite lends itself to mental prayer almost the entire time. If you've ever visited a TLM and been frustrated at how quiet it was or how lost you were, there is a reason: we are supposed to be engaged in mental prayer as much as possible. There's "nothing for you to do", because you are supposed to be praying! St. Pio used to give the advice that only the priest needs a missal for Mass; it is sufficient for those assisting to picture Our Lady at the foot of the Cross. However, this mental prayer is almost impossible for me to do in the New Rite. There is intrusive music (as opposed to chant that encourages prayer), responses, hand shaking, and so much talking. Even changes that were just a product of second Vatican Council (and not intrinsic to the Novus Ordo) make mental prayer harder on the laity: stripping the altars, Mass versus populum, replacing beautiful art with atrocious shapeless sculptures and modernist architectures, etc. Truthfully, it is almost impossible for me to enter into mental prayer for a significant amount of time in a reverent Novus Ordo, much less an irreverent one. And honestly, I just wasn't convinced of this until I started habitually attending the Old Rite. So, since 1) we need mental prayer and 2) we are exceptionally weak, we really need the TLM.

5. Because of the Blessed Sacrament. At a TLM, you know communicants will receive on the tongue, kneeling, with some sort of altar rail. This is rare at the Novus Ordo, and again, you're traveling here, so it's hard to know in advance. Why is receiving without patents, altar rails, and on the hands a big deal? Even if you're not the one doing it? Because when people receive in these ways, the chances of pieces of the Holy Eucharist falling to the floor, remaining on people's hands, being wiped on jeans and pews, and being sucked up into vacuums is astronomically higher when the precautions to prevent this from happening are removed. And if other people are doing this at a Mass you are attending, there is a scary chance that you, too, are stepping on the Body of Christ when you go to receive. If you don't believe me, check out this thread:

What It Meant for Our Trip

Here are five takeaways we had from making this commitment on the road, even though it meant literally planning our itineraries around it, and, in some cases, limiting the amount of site-seeing we could do:

1. It kept us spiritually focused. It is so easy to neglect your spiritual life on vacation. You're off your routine, and honestly sometimes it is pure chaos. Assisting at three reverent Masses during the course of our trip nourished us so much, from seeing the beauty of the other parishes and communities, to joining in on the awesome devotions they were participating in, to just being able to totally immerse ourselves in prayer. Unfortunately, we have had many trips where the Mass was frankly the worse part spiritually of the entire vacation, whether we were watching the Eucharist getting dropped to the floor by a Eucharistic minister—pieces scattering and being trampled about and few seeming to care, material heresies being preached or sung, gross immodesty, and just a general feeling of irreverence in the most important thing we can do on earth. None of that on this trip!

2. It encouraged us. Sometimes, being a traditional Catholic can feel lonely, even if you have a pretty good parish. I think this is a lot of the draw of Twitter, which has it's own problems. It was so amazing to see vibrant and thriving TLM communities. It gave us hope for the future and certainly made us feel less alone in our love for tradition.

3. It humbled us. In some cases, we realized just how good we have it. From a parish where we honestly wished we had a concealed carry just walking from the parking lot to the scaffolding-covered doors to a TLM confined to the basement of a gorgeous cathedral to obvious contention between the two divisions of the parish (TLM vs. Novus Ordo), we were pretty convicted that we far too often take our own parish for granted. On the other hand, we also attended a massive diocesan TLM-exclusive parish. It was old and established, and we were amazed at how much they were able to do, and encouraged to see the heights our own, relatively young parish could reach.

4. It delighted us. There really is no other word! We saw a lot of things on our trip, but I think our favorites were visiting these incredibly diverse, incredibly beautiful parishes. We were so grateful for the opportunity to visit them, we were encouraged by their faith, inspired by their beauty, and humbled by their reverence, in parts of the country very different from our own. Whether we were in a basement, in a bad part of town, or in a nice suburb, it was the same amazing Mass, and for that we were so grateful.

Check out the pictures below, and let us know if you see your parish! 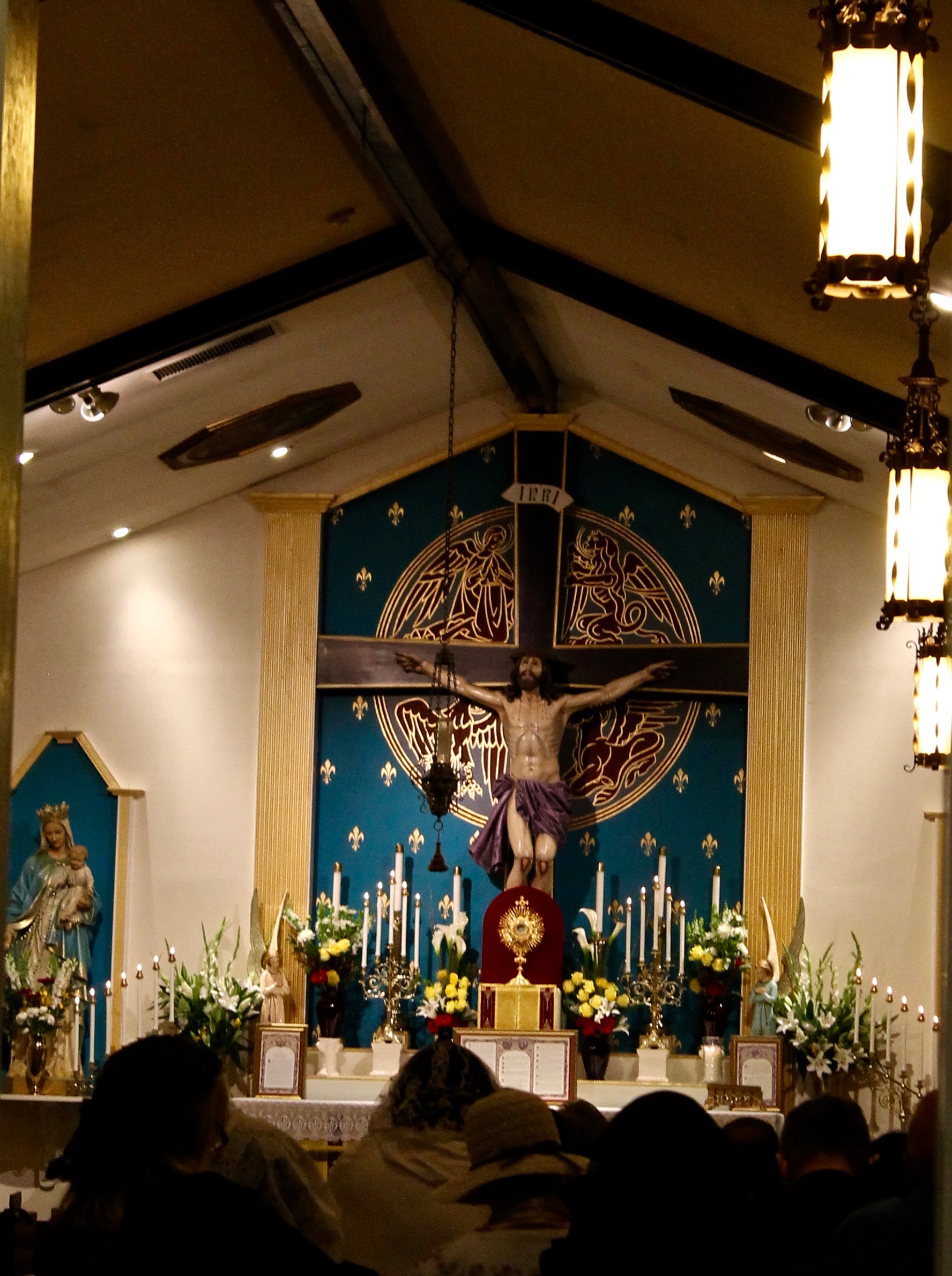