Growing in Your Spiritual Life: the Basics

For a lot of us practicing Catholics, there comes a point where we start to think Hey, maybe I should be doing more. For me, this was when I had a very scary experience. For others I have talked to, it's when they are facing a temptation to anxiety or maybe sins against chastity that they just can't seem to overcome. Still others are inspired to learn more from a sermon, a talk they heard, or an article they read. If you are looking to grow more deeply in your faith (even if you feel you are just starting!), hopefully this post will help. I've compiled a list of things you can do today to start overcoming sin and vice and growing in virtue.

(Note: This is just what I've compiled from other priests. These aren't my personal ideas. I can take no credit for any of it!)

Disclosure: This post contains affiliate links. We potentially receive compensation for purchases made using these links. Check out How We Make Money for more information.

The Beginning of the Basic Purgative Way

I can't recommend a general confession enough. A general confession is when you confess all of the sins you've ever committed. This is one of the first things St. Francis de Sales mentions in Introduction to the Devout Life. He also recommends the practice every five years. We might never know how many bad confessions we've had, due to withholding things or not having the intention of avoiding near occasions of sin in the future. Also, there are more and more stories of priests deviating from the formula of absolution, rendering the confession invalid.

So, clear your conscience and be at peace by doing a general confession. Call your priest ahead of time if you want. Find a reliable examination of conscience. What I did was acquire a hard copy and make small marks in pencil by the things I needed to confess and carried that in with me. This was a great help! Let your priest know at the beginning it's a general confession, and he will tell you what you need to know. Don't be nervous. Remember that stating already confessed sins in the confessional (make sure you're priest knows they have already been confessed) can help to make reparation for them, as I tweeted about here:

2. Avoid mortal sins and the near occasion of sin.

Now you're in a state of grace. Hooray! It's time to never return to a state of mortal sin. What are your biggest temptations? Avoid those like the plague. Get a battle plan. You know those temptations will come. Don't assume you can withstand them alone—beg for the grace to avoid them by doing the things we'll talk about later. What do you need to do to avoid the occasion of sin? Throw out your TV? Get the Covenant Eyes software? Stop hanging around a certain crowd? Break up with someone? Whatever it is, it's a small price to pay for your soul.

Once you have reasonably avoided the mortal sins, avoid the venial ones as well. I'm not saying that you can freely commit venial sins if you are still struggling with mortal sins—it doesn't work like that. I am saying work on the mortal sins first. If you're struggling with one mortal sin and one venial sin, work on the mortal sin first, then address the venial sin. It's just a matter of prioritizing. Remember, any intentional venial sin weakens our will and blinds our intellect a bit, so these are important to start avoiding (again, using the tools we will talk about below.) Too many Catholics stop committing mortal sins, go to Mass on Sunday, and then sit back and relax. We can't be like this! If we are lenient about intentional venial sins, we will eventually be lenient about mortal sins. If you're not moving forwards, you're moving backwards.

Tools to Get There

Moralists say we owe God about 15 minutes of prayer a day out of justice. In fact, our priest counseled us that it was grave matter to fail to meet this. Now, out of charity, we owe Him a lot more. But you've got to hit this threshold.

To grow in your spiritual life and avoid mortal sin, you really cannot just stick with vocal prayer. You've got to be doing mental prayer, too. If you have no idea what I'm talking about, I encourage you to pick up The Ways of Mental Prayer today. Start slowly—try to devote just 10 or 15 minutes to it a day, and then work your way up (and hey—15 minutes of mental prayer is indulgenced in the 1957 Raccolta!). If you need meditation material, Divine Intimacy is a good start. Don't neglect vocal prayer—we need to be doing both. But mental prayer is a higher level of prayer. It helps us to practice custody of the mind, it fills our minds with holy images to replace the impure ones we have seen or experienced, it prepares us to assist at Holy Mass, and more.

So you don't have to wait until your book comes in to start, I write a bit about some subjects to meditate on here, and below is a little bit on the subject from St. Alphonsus: 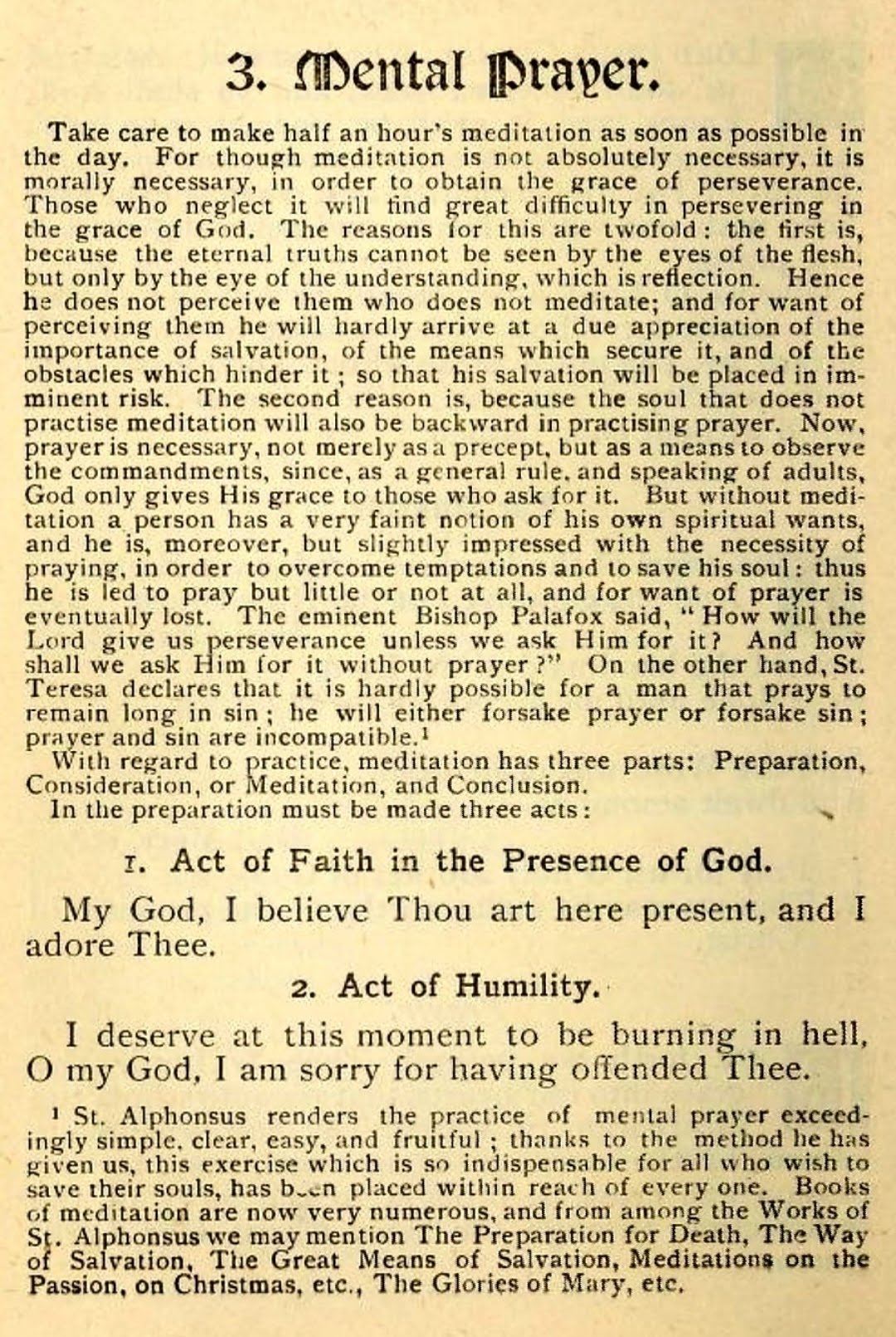 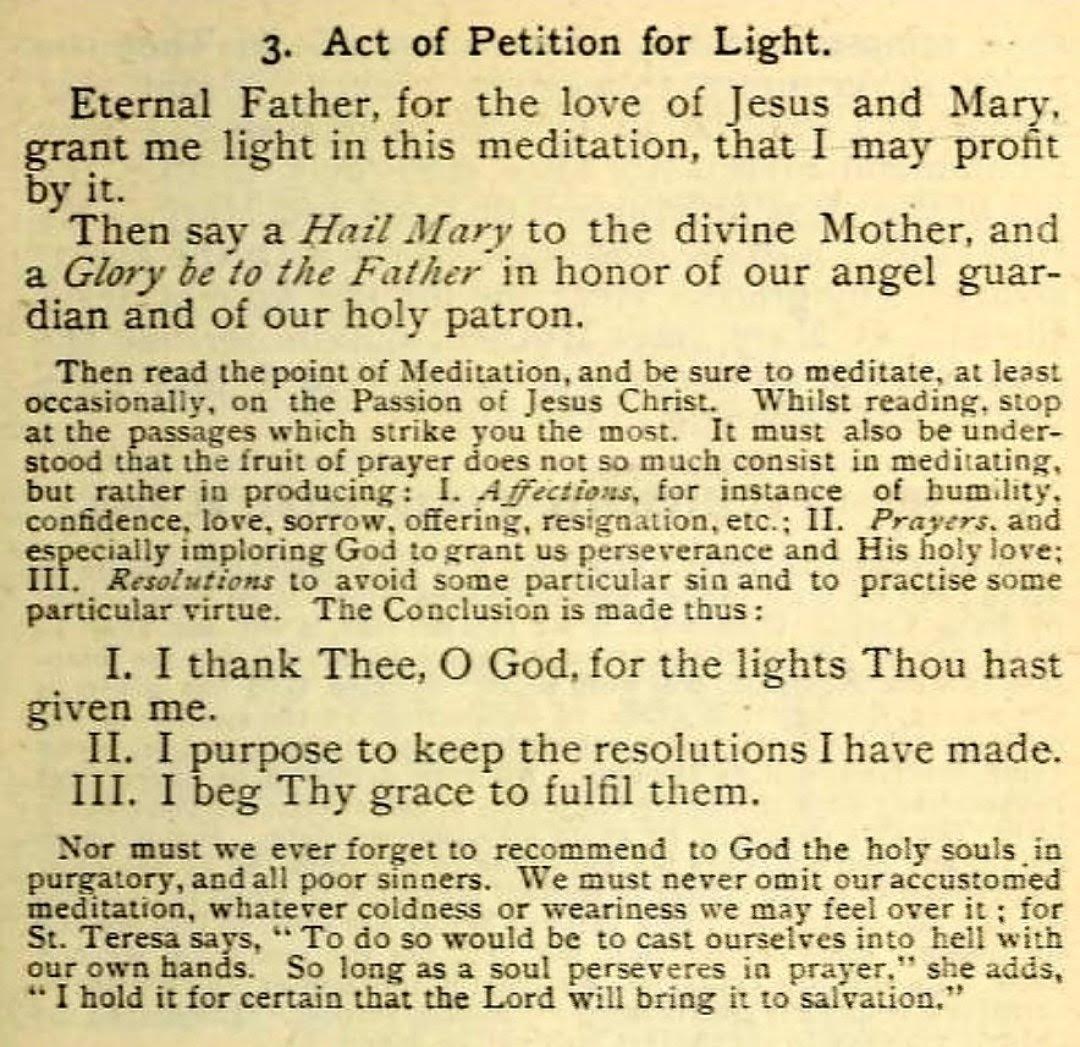 Our Lady has asked us countless times to pray the rosary every day. As Taylor Marshall likes to say, if you're not doing this, you're not on the team. Plain and simple. If you're not sparing 15 minutes of a 24-hour day to pray the rosary, here's an excerpt from St. Louis de Monfort's Miraculous Stories of the Rosary just for you:

Whatever you do, do not be like a certain pious but self-willed lady in Rome, so often referred to by speakers on the Rosary. She was so devout and fervent that she put to shame by her holy life even the strictest religious in the Church. Having decided to ask St. Dominic's advice about her spiritual life, she made her confession to him. For penance he gave her one Rosary to say and advised her to say it every day. She excused herself, saying that she had her regular exercises, that she made the Stations of Rome every day, that she wore sack- cloth as well as a hair-shirt, that she gave herself the discipline several times a week, that she often fasted and did other penances. Saint Dominic urged her over and over again to take his advice and say the Rosary, but she would not hear of it. She left the confessional, horrified at the methods of this new spiritual director who had tried so hard to persuade her to take up a devotion for which she had no taste. Later on, when she was at prayer she fell into ecstasy and had a vision of her soul appearing before the Supreme Judge. Saint Michael put all her penances and other prayers on one side of the scales and all her sins and imperfections on the other. The tray of her good works were greatly outweighed by that of her sins and imperfections. Filled with alarm, she cried for mercy, imploring the help of the Blessed Virgin, her gracious advocate, who took the one and only Rosary she had said for her penance and dropped it on the tray of her good works. This one Rosary was so heavy that it weighed more than all her sins as well as all her good works. Our Lady then reproved her for having refused to follow the counsel of her servant Dominic and for not saying the Rosary every day. As soon as she came to herself she rushed and threw herself at the feet of Saint Dominic and told him all that had happened, begged his forgiveness for her unbelief, and promised to say the Rosary faithfully every day. By this means she rose to Christian perfection and finally to the glory of everlasting life.

If you're not sure where to start, I would recommend Introduction to the Devout Life or The Three Ages of the Interior Life.

We have an entire post devoted to sacramentals, so I won't repeat it here. Check it out. Use them. Fight the demonic and temptations with the weapons Christ has given you through His Church. Get a scapular, get enrolled in it, and never take it off. Seriously! This stuff is essential.

Spend as much time as you can in front of the Blessed Sacrament. Go to Daily Mass as often as you can. Try to go to confession about twice a month (this way you can gain a lot of indulgences, since they require confession within 8 days). Make yourself a rule of life so that you can schedule all of this in!

6. Devotion to Our Lady of Sorrows

At the Presentation, the same time that Our Lady's sorrows were prophesied, it was also prophesied that the hearts of men would be laid bare before her. Thus, many priests encourage the faithful to develop a devotion to Our Lady under this particular title with the intention of finding out our predominant defect. If we are out of habitual mortal sins, this is the next big thing to conquer, and we can be very blind when it comes to examining ourselves. Develop a devotion to Our Lady of Sorrows, put her picture up somewhere, and ask her for the light to see what you need to work on next.

7. Devotion to Your Guardian Angel

Your Guardian Angel was sent to help you in the spiritual life. He wants you to go to Heaven probably more than you! However, he can't help us nearly as much if we don't ask. The more of a relationship we have with him, the more he can help us. Check out this video to learn more:

I wrote an entire post about making your home into a domestic Church, so check it out if you haven't already. I won't say more about it here other than it's so important!

This is mainly done through sacramentals and confession. But there are certain prayers we can say that are especially useful in fighting the demons and the temptations they present us with. You can find prayers that the laity can use in Fr. Ripperger's Deliverance Prayers for the Laity. This video also teaches how to pray binding prayers. Please watch it, learn the prayers, and use them. I can personally attest to their power:

Don't be overwhelmed. Have fidelity to the inspirations of grace as they come, and obey promptly. If we are faithful to these inspirations, we can be confident in God to help us! However, if we ignore these promptings long enough, we have reason to fear they might not come again.

Ah, there is so much sanctification to be found in the daily duties of life! Be the best wife, mother, father, husband, employee, student, you can be. Work as unto the Lord. The work you have each day is not meaningless: it is your means to salvation! Do not waste it!

13. Have Confidence in God

I'll end with this video:

(If you have any questions regarding any of this, please consult a good priest!)

4 Tips to Staying Home from a Stay-at-Home Mom